LONDON — Global equity markets were still on the front foot on Thursday on relief that the biggest hike in U.S. interest rates in more than two decades hadn’t been even sharper.

London, Paris and Frankfurt raced up between 1.3% and 2% in Europe amid collective cheers at Wednesday’s 50 basis point Federal Reserve rate hike and its accompanying signals that 75 bps moves were now unlikely.

It kept European government bond yields largely in check as the Bank of England hikes its rates for the fourth time since December, while Brent prices steadied after the European Union’s plan to ban Russian oil imports have seen them spike 5%.

“The fact (Fed Chair) Powell removed the 75 basis point hike from the table, I think that is what the markets are reacting to, it is a bit of a relief rally,” BlackRock’s EMEA Head of Investment Strategy for its iShares unit, Karim Chedid, said.

“Inflation data is all important now and if it flattens off as the Fed is expecting then the markets will be ok with that.”

In currency markets, the dollar was gradually regaining its footing after the Fed’s move had caused its biggest drop in nearly two months. It is up more than 7% so far this year, on track for its biggest annual gains since 2015.

Sterling shuffled back to $1.2548 despite the 25 bps BoE hike which had been fully expected while the euro also wilted back to $1.05 after dire German industrial orders data.

“The German economy is programmed for a downturn,” said Thomas Gitzel, chief economist at VP Bank, pointing to a plunge in exports in March as well.

“The war in Ukraine, the supply chain problems and high rates of inflation are spoiling companies’ appetite for investment. Incoming orders are suffering from this,” he said, adding that a recession was becoming increasingly likely.

The main action was centered on the equity markets, though.

Trading in U.S. Exchange Traded Funds – the main instruments now used to passively follow major market moves – had surged to 37% of all dealing during Wednesday’s rally, 10% more than normal over the last month.

“It suggests we are getting some dip-buying behavior, which is a good sign for equities,” he added, pointing out too that with bonds globally now offering investors 4% return overall, money was now flowing into that key segment too.

For bears, there were still no signs of a truce in Ukraine ahead of next week’s key WWII Victory Day parades in Moscow.

Having failed to capture Kyiv in the early weeks of an invasion that has killed thousands and flattened towns, Russia has accelerated attacks in southern and eastern Ukraine, including on the Azovstal steel works in Mariupol.

Overnight, MSCI’s broadest index of Asia-Pacific shares outside Japan had risen a modest 0.5%, although trading had been thin with both Japanese and Korean markets still closed for public holidays.

Marcella Chow, Hong Kong-based global market strategist at J.P. Morgan Asset Management, said the region was likely to be relieved that the Federal Reserve’s rate rise was in line with expectations, as it impacts global sentiment and costs.

The half a percentage point rate increase was the biggest jump in 22 years and first back-to-back rise since 2006. Fed Chair Jerome Powell said policymakers were ready to approve similar-sized rate hikes at upcoming policy meetings in June and July.

Crucially for many investors, though, he also said it was not “actively considering” a 75 basis-point rate hike, tempering fears something of that magnitude could be on the cards with U.S. inflation now its hottest in decades.

Among the key commodities, gold was up almost 1% at $1,900 per ounce having dropped 8% since March.

Both benchmarks had risen over $5 a barrel on Wednesday after the European Union laid out plans for new sanctions against Russia, including an embargo on crude in six months.

The proposal, which needs unanimous backing from all 27 EU countries, also includes a phasing out of imports of Russian refined products by the end of 2022 and a ban on all shipping and insurance services for the transportation of Russian oil.

“The oil market has not fully priced in the potential of an EU oil embargo, so higher crude prices are to be expected in the summer months if it’s voted into law,” said Rystad Energy’s head of oil markets research, Bjornar Tonhaugen.

Sign up to receive the daily top stories from the Financial Post, a division of Postmedia Network Inc.

Thanks for signing up!

A welcome email is on its way. If you don’t see it, please check your junk folder.

The next issue of Financial Post Top Stories will soon be in your inbox.

We encountered an issue signing you up. Please try again

Fri May 6 , 2022
Folks ride shared bicycles through early morning hurry hour at the Central Small business District (CBD), adhering to a work-from-residence purchase for people of Chaoyang district amid the coronavirus condition (COVID-19) outbreak, in Beijing, China May well 5, 2022. REUTERS/Tingshu Wang Sign up now for Totally free unlimited access to […] 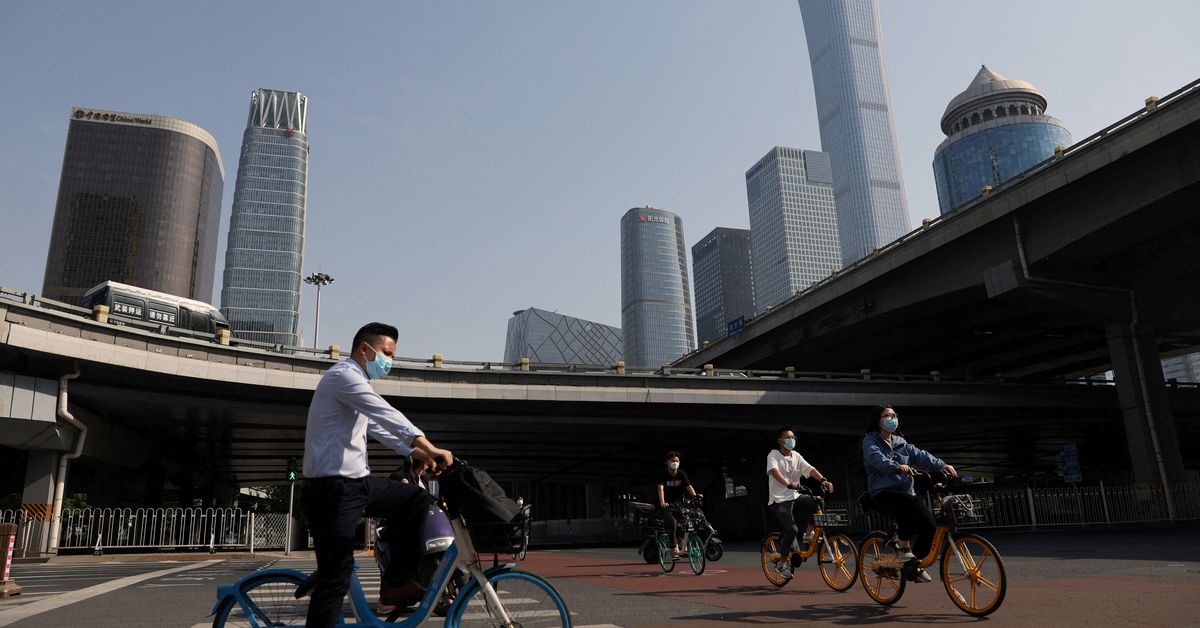